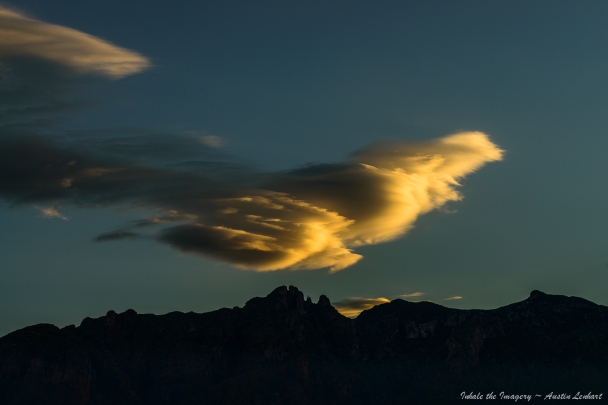 “Dad! Look!!! a shooting-cloud!” At least that’s what I hope she would say, so them maybe we could sit for awhile and watch its’ motion. She could ask questions that only a child could ask of ‘Shooting-clouds’….”Dad, why does it glow on the bottom?”.

“well it has to do with the changes in the air that she moves through and how she approaches that change”.. “So…moving quickly, like all interesting meteoric clouds do, and at such a daring low trajectory, heats the bottom of the cloud, making it glow”, I would say

“Trajectory!”, “What’s trajectory?” she would ask

“Think of the shooting-cloud as a very flat rock that you see by still waters. You pick that rock up, crouch low to get the best approach and throw it… that’s trajectory. It skips across the water, leaving ripples before disappearing .. now think of those ripples as glowing light…” I point to the cloud, “You see Chelsea, that’s your Shooting-cloud; skipping above finger rock on rarified,still waters of Tucson Pond.”

That would be a nice conversation to have.